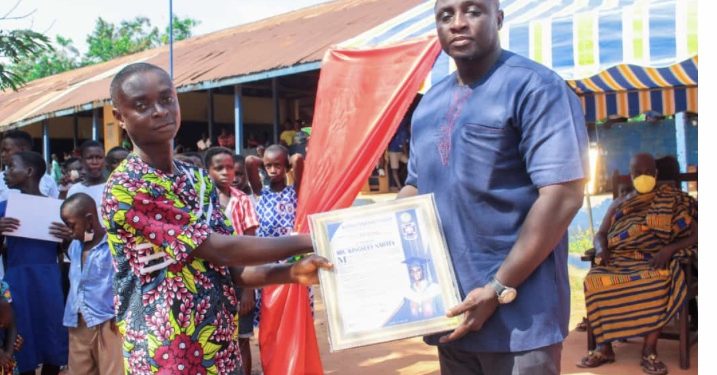 Konko Presbyterian Primary, a school in the Akuapem North Municipality of the Eastern Region, has held its first-ever Graduation and Fundraising ceremony on the theme ‘Nurturing Future Leaders for Development’.

The aim of the ceremony, among other things, was to raise funds to aid renovation works on the One Hundred and fifteen-year-old dwarf-walled school building, which is in a deplorable state.

The school was established in 1906, and history has it that the father of the current President, Mr. Edward Akuffo Addo, began his elementary education in the school.

Unfortunately, the school building has not seen any facelift all these years and has thus become a haven for miscreants and criminals in the community for all kinds of vices when school is on recess/ vacation.

Delivering the purpose of gathering at the ceremony, the PTA Chairman for the school, Mr. Wisdom Akloyo, revealed that the executives of the PTA had a meeting to ponder over how the school building could be given a facelift.

At the meeting, according to the PTA Chairman, the executives came to a consensus that, the current state of the building did not create a conducive environment for teaching and learning, hence it was needful to merge the graduation for the K.G 2 pupils with the fundraising ceremony to generate funds to renovate the school, since getting a new school building seems impossible at the moment.

He therefore called on stakeholders at the ceremony to give generously to support that worthy course.

Many dignitaries were invited to the programme, but few were able to honour the invitation.

Key dignitaries at the ceremony were Mr. Abayie Buckman, Chairman of the occasion; Chief of Konko, Nana Mfodwo Kena; the Regional Manager of Presbyterian Schools, Mrs. Vida Nkansa-Kyeremateng; the Head of Inspectorate of Presby Schools, Pastor Ebenezer Tieku; SMC/ PTA Executives; and the Minister in Charge of the Presby Church in the community. Others were the Local Manager, Mr. Samuel A. Omenako; the Head teacher, Ms. Paulina Famea Darko and others.

In his response, the Chairman paid glowing tributes to all stakeholders in education for their support in diverse ways, which has contributed immensely to sustaining the school in the community.

“I am very grateful to the Presbyterian Church of Ghana for being the pace-setters of education in Ghana and also continuing to champion the course of education”.

She also applauded other stakeholders and actors in the education value chain for their efforts in supporting education delivery in all Presbyterian schools in the region.

She stressed that the theme for the occasion, ‘Nurturing future leaders for development’, was very necessary since “human resource plays a significant role in the economy of a country by contributing to productivity and development. The other resources we have will and can only become useful because of the input by the human resource.”

She, therefore, pleaded all with major stakeholders to live up to their responsibility in nurturing the current generation of children to become future leaders who will lead the development agenda in the communities and in the country at large.

“Traditional leaders must enact bye-laws that proscribe children and youth in our communities from engaging in social vices which have the potential of truncating their education,” she reiterated.

“Parents should also see the training, nurturing and education of their children in this school as the utmost priority in their life and offer the best support in every area of their ward’s life to give them requisite education which will translate into wealth creation and good character which are a catalyst to development in the near future”, she continued.

She re-echoed the need to have good teachers to impart the right knowledge to the children.

She said, “We must ensure that we have morally sound and disciplined teachers in every classroom who will serve as worthy role models to the children under their tutelage.”

On her part, the headmistress of the school, Ms. Paulina Famea Darko, encouraged the young graduating K.G pupils.

“I encourage you to hold steadfast to your values of integrity, compassion, honesty, respect and excellence. Today is the start of a long journey to build character and leadership”.

She also touted the sacrifices of her staff, saying, “I cannot overlook the hard work and tireless efforts my entire teachers put in for these pupils.”

The ceremony was interspersed with poetry recitals, song ministrations and choreography to unearth the innate potentials of the pupils and also to thrill the dignitaries present.

Certificates of Graduation were given to all 11 K.G 2 graduating pupils. To promote healthy competition, 5 students in upper and lower primary classes were also awarded Certificates of Merit for their outstanding academic performances during the 2020/ 2021 academic year.

To boost the morale of the teachers, three staff members were presented with citations at the ceremony. They were: Madam Abigail Otoo, as the Best Teacher; Mrs. Grace A. Frimpong; as the most punctual and regular teacher and Mr. Kingsley Nartey, as the longest-serving teacher. 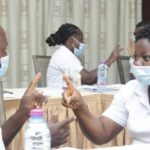 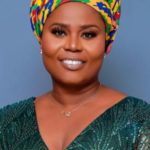