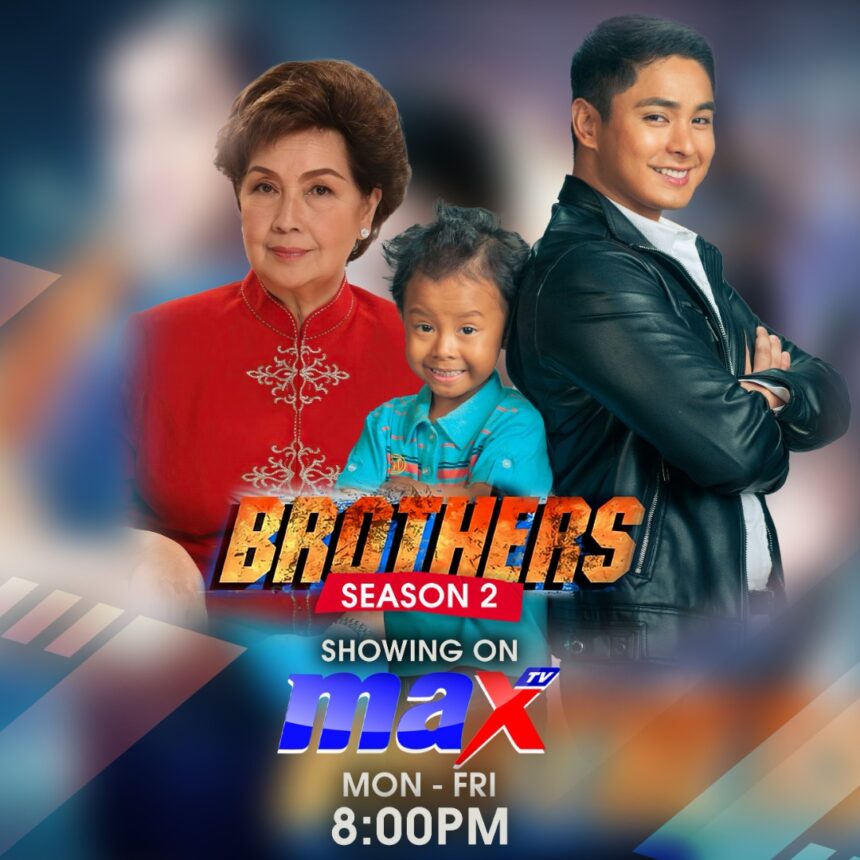 General Oligario returns to the living room with some bloody glasses of scotch to find her laptop lying perfectly at where she had left it. As expected by some of us, the despicable director Hipolito sits innocently. Meanwhile, the 3 aimless stooges of Captain Gina break into the Dalisay house to foolishly search for incriminating evidence against them. Pacquito wakes in the middle of the night and wanders into the living room. He begins to sense someone in the room. Alyana sneaks up on him and a momentarily distraction from her gives the 3 scumbags a chance to hide and sneak out of the house.

Director Hipolito calls Catindig to inform him of the fake cop who had been identified, adding that it wouldn’t be long before the others are also identified. The traitorous snake urges Hipolito to have Diana eliminated in order to put a stop to her investigations. Hipolito argues that it would backfire on him and he would draw fire for being unable to protect one of the chief investigators assigned to track down Bloody Sun. Catindig proposes that they make her death look like an accident but Hipolito won’t hear any of it.

Cardo brings Romulo and his men to Venom’s camp to witness the aftermath of the battle. The commander mentions that he isn’t familiar with the dead scumbags and Fernan states that they were all Homer’s men. Speaking of, Homer and a few of his wounded buddies are treated by a doctor in town and once everything’s all said and done, the Scorpion executes the poor doctor as a token of his appreciation. While the 3 stooges report back to their puppet master, Pacquito bothers us and the entire Dalisay family with last night’s incident.

“I’m sure that it was idol Cardo. He’s probably hiding someone in here.”

Romulo has his men secure the boxes of sophisticated weapons Homer’s group had left behind. As he expresses his disbelief over how Scorpion had tried to kill them, the man of the hour calls Catindig on phone and trades a few choice words with him. He then threatens to publicize everything he had asked his group to do if he doesn’t cooperate with him. Back in Mt. Karagao, Romulo asks how Homer’s group had gotten the money to buy all those weapons and Fernan (Cardo) reveals that a government official had been paying them to plant bombs in Manila.

“Someone once offered us a huge amount,” Romulo begins. “He wanted us to plant a bomb, but we refused him.”

“It was colonel Capili.”

Don Emilio makes merry in Bilibid with the despicable director Ladronio, quiet confident that no one would get in the way of his grand plan. While Senator De Silva plots to use a CCTV footage from a meth lab in Bulacan to ensure Don Emilio’s appeal goes through successfully, Homer’s group meets up with Catindig and they ask for his help to get back at someone. At the rebel camp, Romulo addresses his men and gives a speech about how Homer had tried to wipe them out.

“But their plans were foiled when Agilla learned the truth.”

“But it’s possible for them to come so they could get revenge,” Lena states. “We have to be ready for that. Or maybe, it’s better if we just relocate our camp.”

Luis Mangubat asks Don Emilio how he would be able to get out of prison when he had been charged with serious crimes. Don Emilio reveals that he has lots of powerful backers and as he proceeds to practically lecture him on how the rich are always craving to make more money, Senator De Silva shows Justice Roma from the court of appeals a CCTV footage of his son dealing in drugs. And with that, the scoundrel of a senator blackmails him into doing his bidding – having Don Emilio released, that is.

The despicable director Hipolito files for candidacy as senator. A horde of reporters soon hound him for comments and he goes on spouting some nonsense about continuing with his war against the rebels. The slimy scoundrel declares that he would be able to put an end to the problem once he becomes senator. Homer’s group manages to find a hideout somewhere and the scumbags begin plotting to destroy Fernan and Bloody Sun with assistance from the Vulture, a.k.a Renato Hipolito. 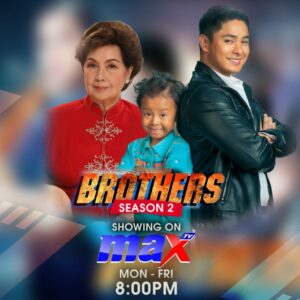 “I’ve confirmed that the commander wasn’t responsible for my son’s death,” Cardo mentions at the rebel camp.

“Turns out Homer’s group was behind it,” Earthworm remarks. They fooled the commander.”

“Those monsters. I wish they were dead. I’ll keep looking for them. They won’t get away next time. It doesn’t matter where they hide, I’m still gonna find them. They’re gonna pay for what they did to my son.”

Senator De Silva watches director Hipolito on TV and begins bitching about how he’s ineffective and unable to keep his promise of bringing the rebels to justice. Upon his arriving at the NMIG, Hipolito the slimy scoundrel receives a grand reception from Diana and her staff. At the rebel camp, Anton apologizes to Fernan (Cardo) for all his bullshit and hostility before and our favourite hero proposes that they let go of everything and become friends. Father and the commander look on as they shake hands.

Catindig informs Hipolito of Homer’s request to have Bloody Sun exterminated. Meanwhile, Romulo expresses his appreciation to Fernan for putting a stop to Homer’s plan to destroy the group. Catindig urges Hipolito to send the SAF in order to boost his chances of winning in the election and Hipolito shuts him up, saying that he would think about it. Back at the rebel camp, Cardo has a talk with his allies and professes his intention of going into town to look for Homer’s group before they take them by surprise. Romulo overhears and offers to go with him.

Don Emilio receives the bad news from his lawyer, saying that he’s going to be out of prison soon. You heard that right. It’s bad news for us, but good news for him? Anyway, Romulo and his men, along with Fernan, head into town to search for Homer’s group. They learn of how the scumbags had killed the doctor who had helped them out. That and nothing more. Speaking of scumbags, Homer bothers Hipolito with one phone call after another and he practically ignores them all as he’s quite busy sulking over the accusations Senator De Silva had thrown at him recently.

Homer bitches on and on like a little girl begging and craving for candy when Hipolito doesn’t take his calls. Eventually, Hipolito picks up and Homer demands that they meet up so they can talk. The traitorous snake Catindig spies. At the rebel camp, Romulo publicizes the atrocities of Homer’s group, declaring that they would make them pay for taking all those innocent lives. And they would pay with nothing but their lives. Senator De Silva the top scumbag of the century calls the poor Justice Roma to manipulate him some more into making sure that Don Emilio is released. Meanwhile, Delfin and Diana discuss the case of the fake cops.

“Are you certain Catindig had something to do with the deaths of those rebels?” General Borja asks at the NDA.

“Yes, General,” Diana says. “That’s why I want him to be kept in the dark when it comes to case updates. I’m worried he might warn that person or he might just kill them.”

“And what makes you think that?”

“I have a feeling that’s what happened to Sandro Tomiby. Maybe that’s why we can’t find him, because Catindig got rid of me.”

General Borja glances around to make sure that there’s no dog spying on them. “What about Director Hipolito?”

“I still haven’t found any strong piece of evidence which proves that he’s connected to this whole thing. And I still have no idea what his motive could be.”

General Borja hands the despicable director Hipolito a file containing the facial composites of the identified fake cops. Hipolito brings up the bombing incident during Senator De Silva’s candidacy announcement and ironically enough, he charges them to solve the case right away. Delfin and Diana look on as the slimy scoundrel begins to spout some nonsense about everyone deserving of justice. Its nonsense cause we all know every single thing that comes out of his mouth is 1st class bullshit. Later, Catindig tails Hipolito as he heads over to the hideout of Homer’s group.

“I’ll finally find out what you’ve been hiding, Hipolito. I only hope that I can use it to bring you down for good.”

Hipolito arrives at the rendezvous place and confronts Homer, demanding to know what he wants. Homer taunts him and asks him to be patient, saying that they would both benefit from his request. At the rebel camp, Romulo and Fernan (Cardo) express their worry over the safety of the children and women. Our favourite hero hopes that Homer the scumbag spares them. Back at the rendezvous place, Homer laments over how his group had lost everything they worked hard for because of Bloody Sun.

“You have to help us take them down. I want every one of them dead. You can make that happen. You’re a powerful man.”

Catindig spies and begins video recording discreetly as a staring contest ensues between Homer the scumbag and the despicable director Hipolito. 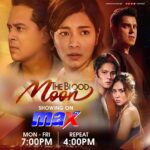 THE BLOOD MOON: Tonight (WEDNESDAY 5TH) On Episode 32
Next Article 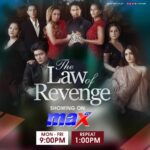