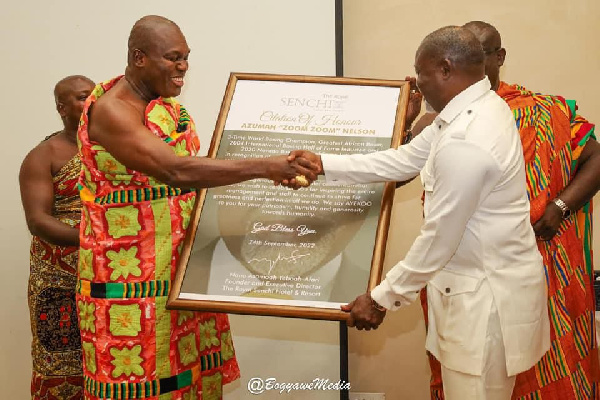 Odeneho Kwafo Akoto III, the supreme chief of Akwamu Traditional Council in the Eastern region, has urged boxing champion Professor Azuma Nelson to lead and take command of the boxing industry in order to develop more experts like himself.

In an interview with Angel News, Odeneho advocated for Azumah Nelson to offer his voice and mentor the nation’s up-and-coming boxers in order for them to accomplish great achievements and honor Ghana as he did in the past.

“So we will beg you to add your voice to the boxing this time among the youths… they should allow you to direct them well so we see a product like you”, Odeneho stated.

Odeneho Kwarfo Akoto III claimed that young boxers are currently underperforming on the international scene due to a lack of innovative ideas, a situation in which Azumah Nelson can be helpful.

Odeneho noted that despite the difficulties he had, such as being defrauded by the whites, Professor Azumah had a vision for his boxing career and was unafraid to pursue it.

Before Nana Asamoah Yeboah Afari, the founder and executive director of the Royal Senchi Hotel, gave him a citation in his honor, Azumah Nelson paid a polite visit to the palace in Akwamufie. He made this call at that time.

Odeneho Kwarfo Akoto III and his elders received a warm welcome from Professor Azumah Nelson who expressed his pleasure and gratitude for their loving gesture.

He expressed his gratitude to everyone there before promising to spread the citation widely.

Sonnie Badu: Recall Asamoah Gyan to the Black Stars before pundits snatch him
Next Article