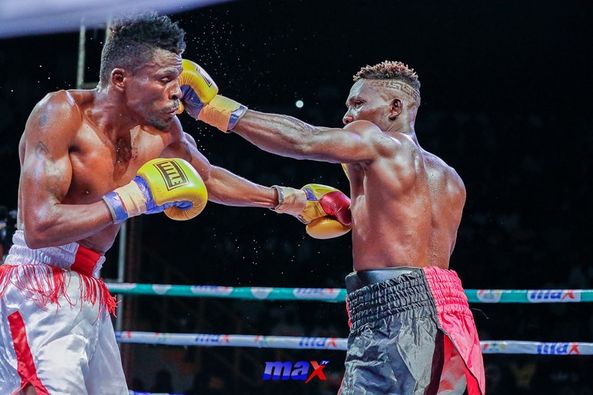 The DE-LUXY Professional Boxing League thrilled spectators at Fight Night 10 at a packed Bukom Boxing Arena, in different weight categories, more than ever before.

Fight Night 10, after delivering 7 bouts, is only one of the reasons why the 2022 Professional Boxing League is the biggest platform and the best yet in Ghana.

Shown on MaxTV, Fight Night 10 of the Deluxy Professional Boxing League started Live from the Bukom Boxing Arena with the 1st contest at 9pm.

Michael Ansah of Ghana, in a red and black trunks, shutdown the Arena with an impressive victory over his Togolese opponent Komlagan Houkptin in the international RBO lightweight championship.

The was love in the air as the sweetheart of Aminu Quarshie cried tears of joy as he won his fight.

After 2:48sec in round 2, Aminu Quarshie expertly dispatched James Lamptey back to the Palm Springs Gym as he displayed excellent boxing skills.

Musah Lawson of the Ghana Prisons Service literally toyed with Iddrisa Amadou and surprisingly finished all the rounds of the bout as the judges scored 60-54, 60-54, and 60-54.

The ‘DYNAMITE’ from Berekum expertly defeated debutant Isaac Commey after he K.O’d him within 1:21sec in Round 4.

Coming up next is Fight Night 11 on Saturday 20th August 2022 at the Bukom Boxing Arena from 9pm and Live on Max TV Nationwide. 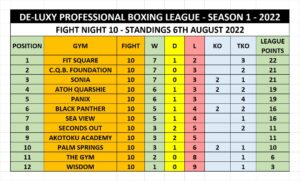 Deborah Acquah: Winning medals is not about who has the best athlete
Next Article 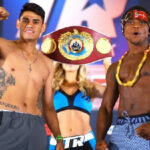 Isaac Dogboe is considering a third match against Emanuel Navarette.
Leave a comment