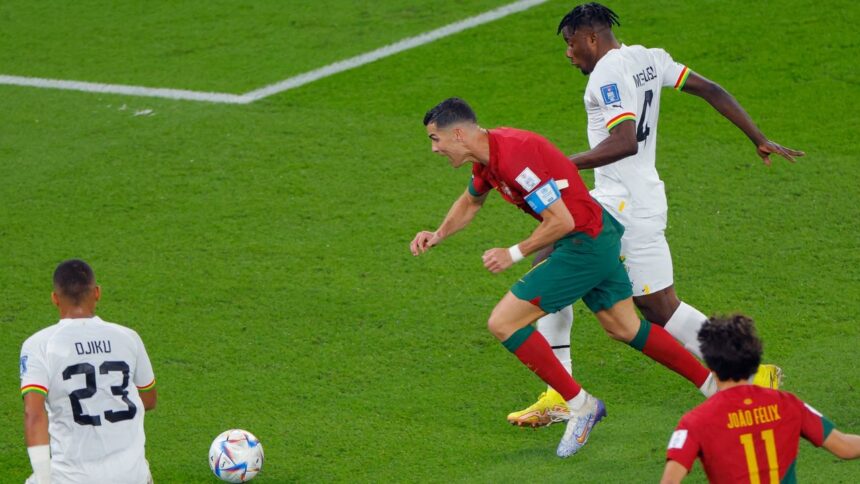 Sunday Oliseh, a member of the FIFA technical study group, has praised Cristiano Ronaldo as a genius for making contact and winning a contentious penalty in Portugal’s victory over Ghana on November 25, 2022.

Ronaldo was penalized for making contact and collapsing after a fight with Ghanaian defender Mohammed Salisu, according to referee Ismail Elfath.

Former Nigerian player claims that Ronaldo made a wise decision to win the penalty.

“The Ronaldo penalty, people can say what they want about him, but the smartness to wait for that second, to touch the ball, continue his leg and then get the contact. That is a total genius,” Sunday Oliseh (member of FIFA technical study Group)

Ronaldo converted the resulting penalty kick to earn Portugal a 3-2 victory over Ghana at Stadium 974 after the referee declined to utilize VAR for a second look at the event.

In contrast to Oliseh, famed Premier League referee Mike Dean expressed a different opinion in response to the penalty.

Mike Dean will not hold the on-field official accountable because, in his opinion, the VAR room officials should have demanded a review of the situation.

“That looked like a penalty from the referee’s angle and I can understand why he took it. The issue is the new thing now which is VAR which you think to get the referee out of trouble.

“From the angle we’ve seen, the defender clearly clears the ball. Ronaldo then touches the back of the referee and instigates the contact. It’s not the referee’s fault because he gave the decision on the field of play but the VAR in my opinion should have gotten involved and invited the referee over. It is scary I’ve to say. I’m just astounded.

“I like to support referees all the time but you can’t defend stuff like that. For me, it should have been an obvious error. He should have gone to the screen and looked at it. That was 100% wrong,” he said.

According to reports, a FIFA investigation into the referee’s actions has been requested as a result of the first Portuguese goal, which was a penalty.

World Cup 2022: There was no need to consult VAR in Ghana game – Portugal coach
Next Article