The next two games for the Black Stars in the 2022 FIFA World Cup, according to Ghana head coach Otto Addo, are must-win games.

When Ghana lost to Portugal 3-2 in the opening game of Group H on Thursday night, the coach was in the dugout.

Coach Otto Addo made it obvious in his post-game interview that he was not pleased Portugal was given a penalty kick.

He claimed that the center referee erred when he gave the 2016 European Champions the penalty.

Coach Otto Addo has emphasized that the Black Stars must now get ready and battle to win the following two group games against South Korea and Uruguay after the game is completed.

“The game plan was ok but the referee gave a penalty which is not a penalty. Everyone saw Salisu. It’s a mess. We had our chances even in the last minute. I can’t be proud because it’s zero points. We have to win our next two games,” Coach Otto Addo said.

Monday’s match between Ghana and South Korea will get underway at 1pm. World Cup 2022: ‘We paid for our mistakes’ – Andre Ayew
Next Article 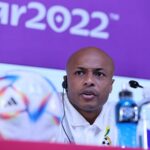 World Cup 2022: We need to score more and concede less – Andre Ayew after defeat to Portugal
Leave a comment